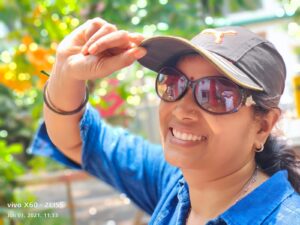 Dr. Deepa Gupta started writing stories and poems from a very young age and many of her articles and works have been published in various magazines and have been appreciated over time. After successfully completing M.A., she went on to do LLB and secured gold medal in it. She further decided to do B.Ed. to pursue her interest in teaching. She finally completed her Ph.D. and earned doctorate in Hindi from Andhra University in the year 2014.

She has 11 years of teaching experience as a Hindi lecturer in MVR Degree College, Visakhapatnam and has helped many students over the course to build strong foundation and interest in the subject. She also has considerable experience in teaching and helping Hindi speakers to learn Telugu and Telugu speakers to learn Hindi.

She has been actively taking part in various events and Kavi Sammelans (poet gatherings)  held in different parts of the country conducted by renowned organizations such as BARC, Indian Navy, BHEL, SBI, BOB etc. Her articles have been published in various national and international magazines such as Sahitya Kunj, Madhumati, veena etc. and have been acclaimed critically. She has also been featured in Doordarshan and All India Radio on multiple occasions. Her collection of poems ‘PAWAN EK JHONKA’ and short stories ‘MRIGTRISHNA’ have also been published successfully.

She currently runs a youtube channel which help the viewers on various topics such as Hindi Grammar, Hindi-Telugu lessons, competitive exams   and poetry.

She has also practiced as a lawyer in the courts of Chhattisgarh and Visakhapatnam and has considerable idea on this field.

Her personal motto in life is to generate and spread happiness among everyone and her works as well as efforts have been appreciated by many  over time.